TENNESSEE SCHOOL FOR THE DEAF

EARLY HISTORY OF THE SCHOOL 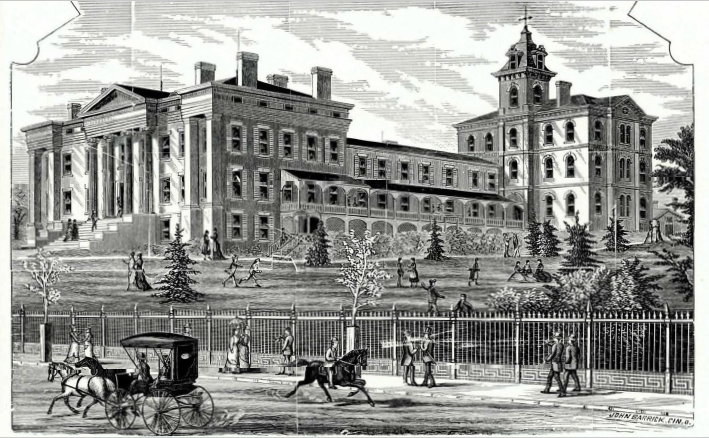 In July 1844, a board was appointed to determine the first steps for establishing a school for the deaf. During the next several months of study and correspondence, the board contacted Reverend Thomas MacIntire from the Ohio Institute of Education of the Deaf and Dumb and asked him to take charge of the Tennessee school as principal and teacher. He accepted and asked to bring with him a Deaf man, Mr. Charles Myers, as an assistant teacher.

In January 1845, it was decided by the Trustees to rent the Churchwell house in East Knoxville for $100.00 a year. Mr. MacIntire began his duties on April 1, 1845 - 1851. It was named the Tennessee Asylum for the Deaf and Dumb and opened on April 14, 1845. They worked to get the school ready with equipment and the school was opened in June 1845, with six students and increasing to nine by the end of the session.

In January 1846, the General Assembly passed an act for the school to be incorporated and named Tennessee Deaf and Dumb School.

In June 1846, Calvin Morgan of Knoxville gave the school two acres of land just west of the center of town. Money was secured to erect the first building (later known as the East Wing). In the fall 25 students were enrolled.
In the Spring of 1848, the main building had begun construction and the cornerstones laid in May. Tennessee white marble was used for the steps in front of the main building and columns on the front were added for approximately $28,000. It was completed in 1851.

In June 1852, an additional three and a half acres were purchased on the east and north ends of the school, improvements were made, and the grounds were enclosed with a fence.

In May 1858, two and a half more acres were purchased on the side of the school, making the entire grounds eight acres.
In June 1861, 52 students were sent home, due to the outbreak of the Civil War. Soon afterward, the State authorities took possession of the property as a Military Hospital. The buildings were used by the Confederate forces until September 1863 in which time the Northern army occupied it until September 1865 when it was vacated, and the Trustees took charge again.
Credit to:
E. Conley Akin; 100th Anniversary yearbook 1845 – 1945; 150th Anniversary yearbook 1845 - 1994